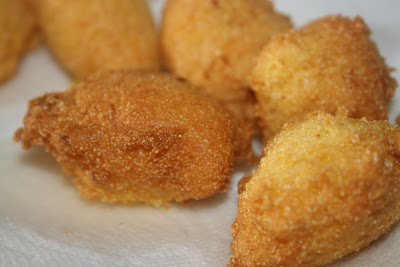 Many of you would love to hear the story of how I won the grand prize, a royal blue ribbon, the pride of having the year's worth of bragging rights and $5000 at the National Cornbread Festival in Tennessee. This is a story I would love to tell you, but unfortunately it wouldn't be true. This is still a happy tale of a scatterbrained traveler, that starts with a 1 AM red-eye out of Vegas and a TN arrival at 9 AM the following morning. A quick pop by Thrifty Rental Car and I was on my way to South Pitsburg. This is a feat for me, to travel alone and do grown-up things like take a rental car into an unknown city. Truly, I can get lost in the Del Taco drive through. Some people have an intuitive compass, and they must feel so safe and secure in the world. I'm destined to be lost, wherever I go, whether on the way to the library, or on the way to South Pittsburg Tennesee. There is a part of me that somehow enjoys the disorderliness of it, the feeling of being on the wrong road and heading in the wrong direction. It's more interesting when things go a little bit wrong. Sometimes with a little chaos the real fun begins. But not when you are alone. I don't think I was meant to be alone. I think it started, well actually with my birth. My sister Michelle is only 10 and 1/2 months older than I am, and we were inseparable. We went to kindergarten together, graduated from high school. I remember not wanting to go to to school on the days she was sick. I wasn't sure I wanted to stay in college the semester she decided to go home and work. But I did and I was fine. But it wasn't as fun without her. So in the interest of self realization, my theory is that I adore chaos with loved ones, but prefer order with strangers. Any psychologists out there? Just hoping I'm normal. Always hoping.
By the way, I made it to South Pittsburg without getting irretrievably lost (thank you mapquest), while enjoying the gorgeous Tennessee spring dogwoods and lilacs as freeway backdrop. Since the bored teenager behind the desk of the hotel informed me that none of the rooms were ready, I decided to do a little exploring on my own. And by the way, how can none of the rooms be ready an hour before check in time? Just wondering, although I'm sure it's possible that the maids clean every single rooms at the exact same time, I'm also certain that's it's highly unlikely. But there is a lovely underground waterfall outside of Chatanooga, only a 40 minute drive from South Pittsburg, if you don't get lost. Ruby Falls, to be exact, is well worth visiting, even if you do have to do a couple of u turns. 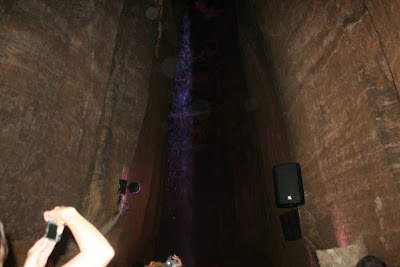 Except when you are finding out that you are not too good on your own. Hundreds of feet below the ground, in the dark of the cave, beginning to feel just a teensy bit claustrophic, I suddenly realized that I'd locked my car keys in the rental car. I spent the next hour of the guided underground tour hoping that a good locksmith was better at finding Ruby Falls than I was. Can I put in a plug for Triple A? They more than earn their minimal yearly payment, and they never embarass you about locked keys in the car. I know, because we had to call on their services in Nebraska in February, en route to Grandpa's funeral. Only this time, I wasn't the one who locked the keys in the car. It's very important that the Quiet Man make at least three mistakes a year, just to make me feel a little better about myself. At this rate, he still has to make two more before December.
I'm feeling quite verbose. Are you still with me, dear readers? If you need to get a drink and a snack or take your kids to soccer practic, I understand. I'll wait. Are you back now?
By the time I got back to my hotel, long after the earliest check in hour, and lugged my groceries, luggage, cooking gear up the stairs (no elevator) to my room, to my dismay, the room had not been cleaned. When the same bored teenager asked if I was sure the room hadn't been cleaned, I looked around at the state of the hotel, and wondered just how I knew for certain, and then politely referred to the unmade bed and lump of used towels on the ground. If it weren't for those two things, I might not have known the difference myself. The rest of the night was uneventful, although if I'm practicing self discovery, I might want to ask myself why exactly I choose to watch documentaries about murder when I'm all alone in shoddy hotel rooms.
I'm happy to report that the Cook off was lots of fun. I ran into several friends from previous cook offs (pictured below is Pat from National Beef, but there was also Rebecca from Nordicware, Catherine from her funny blog), and I always feel relaxed when I'm cooking. 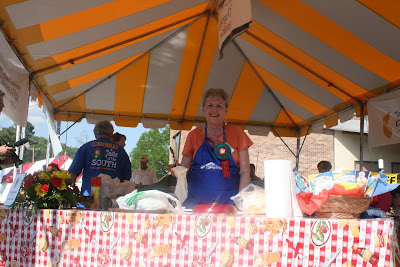 With a spoon in my hand and an apron tied around my waste, I feel in my element, even when on stage, even with a camera crew and an interviewer chatting away while you stir together Italian Cornbread Pie. The cornbread festival was full of fun vendors, exciting games for kids, friendly folks, and my favorite attraction: Cornbread Alley. For $2.00 you can walk down the alley and load up on samples of interesting cornbreads, like squash and sage cornbread, cornbread coated apple fritters, grits cornbread, and my favorite Southwestern Hush Pupppies. I've already made some at home.
And as I mentioned, I didn't win the festival, but we runner ups were dubbed honorable mentions, handed a very pleasant $600 and an impossibly heavy gift basket full of everything a lover of cornbread would ever desire. The winner was an adorable young mother named Sonja with her Buffalo Chicken Cornbread and Blue Cheese Salad. Here she is, getting her cornbread champion helmet from Bob Kellerman and his fab plaid hat. 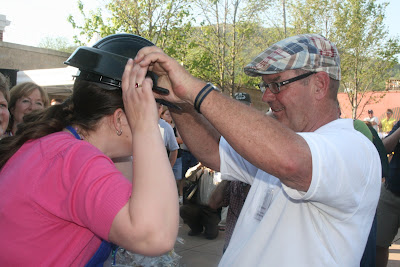 Just as soon as the recipe is posted, I'll make it and write about it here. And the same goes with my recipe. I don't want to jump the gun on the sponsors by posting it here, so I'll wait and share it at that time.
I got home without incident, unless you count that one of my shoes got caught in the security conveyor belt and a rather large-bottomed security worker in tight navy polyester pants had to CRAWL in to get it out. Even though I was alone, I enjoyed that. I also enjoyed the reading time I had. I finished off four books, except I skipped that chapter in Outliers about plane crashes, preferring to read it when I was safe at home. And I was safe at home, for a day. And now I'm away again with my little charges and our traveling school room, visiting my sister who just had beautiful baby Sunny. So I'll get off this computer, go pick up that lovely baby, and leave you now with this hush puppy recipe and my best wishes for a good weekend full of love, companionship, and u turns. 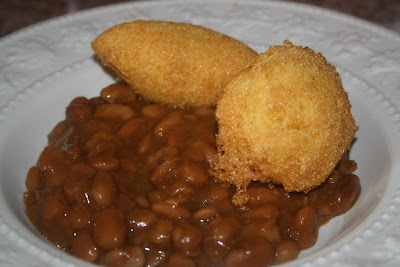 Money Saving Tips: Use a small saucepan so that you can use less oil to get a one inch depth. You'll have to work in small batches, so make sure you're diners are ready to eat.
South Western Hush Puppies
Estimated Cost: $2.00 for about 18
Notes: I made a plain batch, hoping to win the charges over before I go for the big flavors.
1 cup cornmeal
1/4 cup chopped green onion
1/2 cup corn kernels
1 tablespoon chopped canned of fresh jalapeno
1/2 cup shredded cheddar cheese
1 teaspoon baking powder
1/2 teaspoon salt
1/4 teaspoon each chili powder and cumin
1 egg
1/2 cup milk
Combine in a medium bowl the cornmeal, onion, kernels, jalapeno, cheddar cheese, powder, and salt. In a smaller bowl, combine the milk and egg. Add to dry ingredients. In a small saucepan, heat about 1 inch of oil to 350 degrees. Drop hush puppies by tablespoon full into hot oil, cook until golden brown and drain on paper towels. 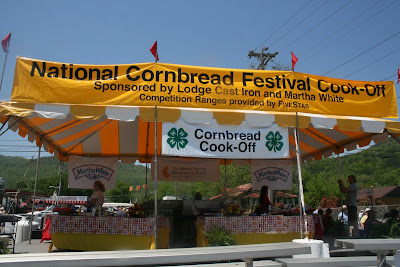 Next Up:
I think.....
Jelly Donuts
I've developed a sudden craving.
Posted by Prudy at 9:06 PM

I'm glad you didn't get lost to write this post! Thanks for sharing your experience in the festival, it sounded so much fun. I wonder if I could be calm like you say you are in those situations. Enjoy the new baby!

Oh I just love hush puppies, I can't wait to make these! Sounds like you had a great time, thanks for the recipe!

Sounds like you had a great time! I get lost all the time too - one time I was supposed to be going from Wisconsin to Iowa and ended up outside Chicago...yeah. Can't wait to see your cornbread recipe!

Thanks for sharing your experience! Sounds like you ended up having a great time at the festival. Those hush puppies looke great, too... reminds me of when I worked at a fast food seafood place in high school... ah, memories!

What a fun experience!

Sounds like a lot of fun! I love hush puppies. Yours looks great :)

What a trip -- so many things going wrong, but so many memories and stories in the making!

Congrats on your honorable mention! I get lost everywhere too!

We're having red beans and rice tonight--I might have to whip some of these up to go along with them!

Getting lost is the best. Locking your keys in your car is not. Other than that, it sounds like you had the vacation of my dreams.

erin, posts like this make me miss you SO MUCH. i just can't stop giggling when i'm around you, or when i read a blog post about your escapades. thanks for being my friend and for being so real.

I absolutely LOVE hush puppies! I am so excited to try this recipe, thanks!!!

Sounds a wonderful experience, well except for the bit where you locked your keys in the car!! Those hushpuppies look delicious!

Gosh would my hubby love these!
You take the BEST road trips! I need to plan more fun events like that.

well so glad you love to do grown up things! but i'm sorry you didn't win the corn cook off! I just love corn bread, corndogs, corn muffins, corn cakes, and the list goes on!

This is so funny, Prudy/Erin :)

I'll have to tell you about my trip there back in 2004--I couldn't find fresh basil, and made Kevin drive to drive Chattanooga to find some (without success!)

Sorry to be absent from visiting your site for awhile--it's even better than ever :)