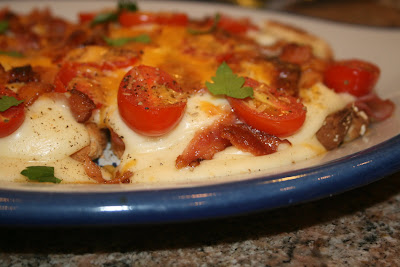 I hope everyone had a lovely Easter. It was everything a carefree and sunny spring day should be, warm and green with the smell of lilacs in the air. To complete the feeling of whimsy, the two little charges looked extra spring-y and angelic dressed in pastels for church. 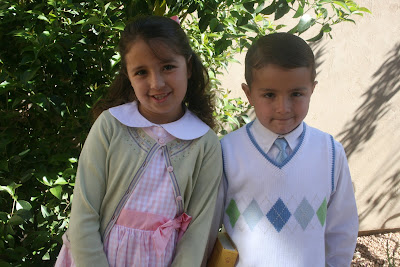 They looked a little less composed a few hours later when they were running through the grass searching for eggs and arguing over amount of loot, but I can survive for days on moments of serenity.
I made a ham, a really lovely tender glazed ham. Readers, I really should have posted a how-to-bake your own ham before the holiday. My ham cost $6.00 at the grocery store, plus about 50 cents for my glaze ingredients, and it was all made the day before with very little effort on my part. 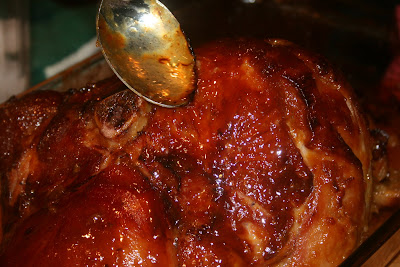 One of our dinner guests remarked that people probably don't know that they can make good ham at home on the cheap, and for that reason they're willing to pay exorbitant costs for a ready to eat ham. The same dinner guest proclaimed it the best ham he's ever eaten; there's nothing I love more than a complimentary guest. I'll post my ham recipe, but maybe not for a few months or even next year, since who really wants a glazed ham recipe the week after Easter? A ham recipe with leftover ham is an entirely different story. This recipe comes from the famous Brown hotel in Louisville, Kentucky. (My husband brought me this nifty dish from a business trip there. 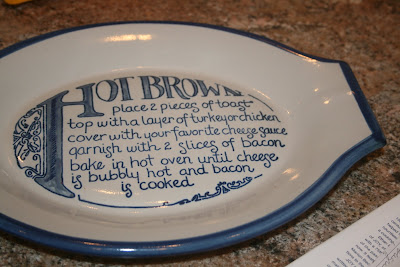 A pyrex baking dish works just as well and holds more.)Normally, I make this dish after Thanksgiving, since the original recipe showcases fully cooked chicken or turkey, but I thought I'd take a crack at it with ham. The results were delish. Hope you'll like it too.
PS Thanks for your patience as I continue to struggle with my virus laden computer. On the positive side, I've been able to read several great books while I wait and wait and wait for our cranky computer to do its computery stuff. 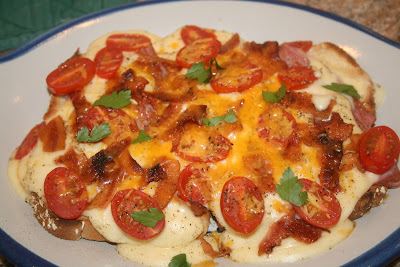 I moved away from KY 2 years ago and never really appreciated KY Hot Brown. It's funny how when you're removed from something you adore it that much more...loved the recipe post!

not a huge ham lover, but this looks good. Please tell me you are still going to to the carrot cake recipe :). I have been watching for your post :)

This looks great and what a nice gift hubby gave you. Your 2 charges have such sweet faces!

What beautiful children. The ham photo looks like it is staight out of a magazine, beautiful! The ham remake sounds delicious. I have leftover ham so your recipe is timed perfectly.

Cute kiddos! Never heard of a hot brown before!

Wow a great creation!! Your charges are as cute as ever Prudy! ;)

can you still post the ham recipe even though easter is over. Ham is great to have when you are serving a large crowd and that could be anytime around my family. Thanks!

I've heard of hot browns but not with ham. Good idea!

west doesn't look too pleased with himself in pastels:).

I am thrilled to see that you made this! My hubby served most of his mission in Kentucky and he never had heard of this dish! It was on my cooking list when we got married and I have yet to make it!
Looks good!

Looks delicious. We also had a ham for Easter...very simple to make.

Isn't it fun to have a dish with a recipe on it? The little ones did indeed look angelic; they must not have been fully awake yet (just kidding).

I want the ham recipe! We actually smoked a ham about a month or so ago that I got at Sams for $10!
Hope everything is well with you!

my stars I haven't had a hot brown in ages!
wow does that bring back memories!

I'm glad you had a happy Easter!

Christmas will be here soon and I told Kristina that you had a good, nay great ham recipe, but alas it hasn't been posted yet. Ham is one of Kristina's favorites please please please may we have your ham recipe?
Thanks, Karl
p.s. had the pulled pork tacos the other night. YYYYUUUUMMM!!!