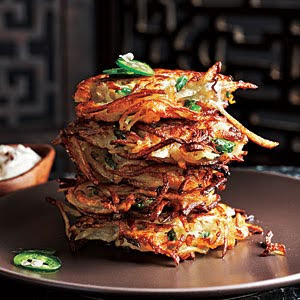 photo from Cooking Light Magazine
When I was in high school, my Mom decided that our family should be celebrating-or at least learning about- Hanukkah. She invited one of my Jewish friends (Sheryl Ziff) over to teach us about the festival of lights. At first I was a little embarrassed. I mean, c'mon Mooo-oooo-ooooom. You don't talk about miracles with your high school friends while your little brothers and sisters sit around giggling in a semicircle, do you? Do you? Huh? But as usual, mother knows best. I loved hearing my sweet, smart friend explain some of the beliefs and customs of her religion. It was inspiring, like any miracle I accepted in my own religion. For the record, my grinning brothers and sisters in the semicircle loved it too. Later my parents went on a trip to Israel and bought a menorah, a dreidl and some of the other customary Hanukkah gear. We were outfitted to become honorary Jews, at least during Hanukkah. So we kept on celebrating. Last month, on our trip to Israel, I bought my own menorah in the old city of Jerusalem. (My little brother Jack talked the vendor down to two for $26, and we split the deal.) I couldn't find a dreidl (can you believe that?), but I still have the pathetic one I made from cardboard fifteen years ago. Eh, it works. But most important, we have latkes, my friends. If you have to choose between menorahs, dreidles and latkes, go with latkes everytime. I'm petty sure you can't have Hanukkah without them. I just found this spicy, super-hip (guaranteed to impress high school friends for sure) latkes studded with slices of jalapeno in Cooking Light Magazine. Oh, all right, you can leave out the peppers if you didn't grow up on burnt tongues in southern California. But make these latkes! And get out your candles and get celebrating. A miracle always calls for a party. And for the record, our moms are right about ev-er-y-thing. It is pointless to resist. (I'm talking to you, Sailor!) 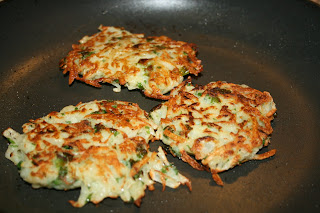 Notes: Latkes are good, cheap peasant food. Potatoes, onions and oil are the star ingredients, so these will cost you mere pennies to make. Also-I was concerned that the potatoes would discolor after draining for 30 minutes. They got a bit pinkish initially, but once I mixed them with the eggs they returned to pristine white. 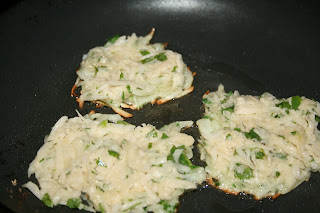 I LOVED it when Sheryl Ziff came over and talked to us about Hannukah! I will always remember it. And I'm so glad that we got to go to the Holy Land and buy menorahs. I've always wanted one and I looked almost everywhere for one, one year and of course didn't find one. (Not too many Jewish people up here, I guess.) But now Target has them. I have always loved observing Hannukah and teaching my kids about it. And now I can't wait to celebrate with these latkes. They look so delicious. Thanks for sharing Prudy.

Those look like something my husband would scarf down!

I love celebrating Hannukah with my kids, although most of them want to skip to the donuts and don't care for the latkes. Oh well, more latkes for me! Do you have a Learning Express store? I saw dreidles in there. Or try Land of Nod. Or keep using your cardboard one:)

I was grown and gone, but only around the corner, when Sheryl Ziff came over. But I remember when she did. Mike and I didn't get to buy a menorah when we were in Israel but I wish we had. It was really only because it was so busy and I kept thinking we'd have time to pick one out. Oh well.
These latkes look delicious. Put cilantro on anything and I'm in!

I have always wanted to try making Latkes! Maybe this is the year to put my fears aside, and give it a try!

It is late, I am tired and now hungry! I love Jewish traditions!

As an Irish girl I love any potato recipe, as an Australian I appreciate multicultural influences, and as a resident of California I'm loving this spicy recipe - thanks!

I just wanted to stop by and comment on these. I made them for our Christmas brunch this year and everyone loved them!! They are defintely in my "to keep" list of recipes.

Thank you for sharing this recipe. I learned to make latkes when I lived in New York, and my class makes them every couple of years. This isn't a recipe for the kids, but I will sure enjoy making them for my friends and family!
Ginger

These were great! only thing...way to hot. After the first batch, I fished out the jalepenos and added a little more flour and colby-jack cheese and it really cut the heat out. Loved the idea of mixing it up a bit. thank you for the suggestion!!

My mum grew up during the depression and her mum made these, or similiar that they called mock fish, I made these recently to take to a bbque and they disappeared fast, everyone loves them

What a data of un-ambiguity and preserveness of precious
familiarity regarding unexpected feelings.

Feel free to surf to my weblog: Wikipedia Reference

My coder is trying to convince me to move to .
net from PHP. I have always disliked the idea because of the expenses.
But he's tryiong none the less. I've been using Movable-type on various websites for about a year and am nervous about switching to
another platform. I have heard fantastic things about
blogengine.net. Is there a way I can transfer all
my wordpress posts into it? Any kind of help would be really
appreciated!

Here is my weblog - useful link

Wow, that's what I was looking for, what a stuff! present here at this web site, thanks admin of this web site.

I am sure this piece of writing has touched all the internet users, its really really fastidious paragraph on
building up new weblog.

hello there and thank you for your info – I have certainly picked up anything new from right here.
I did however expertise a few technical issues using this web site, as
I experienced to reload the website a lot of times
previous to I could get it to load properly. I had been
wondering if your web hosting is OK? Not that I am complaining,
but sluggish loading instances times will sometimes
affect your placement in google and could damage your high-quality score if ads and marketing
with Adwords. Well I am adding this RSS to my e-mail and can look
out for much more of your respective fascinating content.
Ensure that you update this again soon.