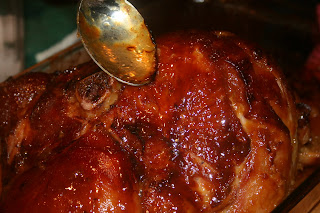 I used to buy a glazed ham from a certain shop every Easter. It was expensive and the lines were ridiculously long, but I believed that was my only option. Making a ham, after all, must be at least as difficult as roasting a pig in a pit, right? Hams were something that grandmothers made, certainly not modern women with options. After we'd moved to a small town, and I couldn't revert to buying that specialty ham, I decided I'd have to face my fears and make my own ham, just like Grandma. I've never looked back since. There's a conspiracy out there to make you believe that making a ham is too difficult or time consuming. The simple truth is that it couldn't be easier-or cheaper for that matter. I've made it as easy as I can in the directions. You just can't go wrong. Every grocery store in town is going to try to lure you in this week, with rosy pink hams just ripe for the picking at downright cheap prices. Buy it fully or partially cooked. Buy it half, buy it whole, buy just a few pounds. I've got you covered with directions below.
My glaze is simply brown sugar, mustard, and honey-a pleasing balance of sweet and tangy. You could go crazy and experiment with jams, marmalades, or even a bit of cola. And by way of endorsement, I made this ham for my parents last year. Dad asked, "Why would anyone ever get a specialty ham, when they could make this?" 'Nuff said. 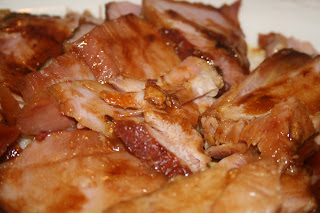 Money Saving Tips:
Hams will be so cheap this week, you might just want to buy two and freeze one. Use good brown sugar for the most complex flavor. 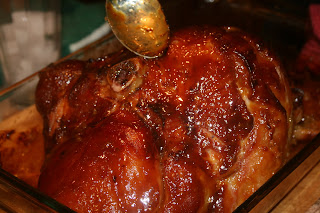 Brown Sugar and Honey Glazed Ham
1 half or whole Ham, labeled as "fully cooked", or "ready to eat"
**** See directions below for a ham that is not fully cooked
1 cup brown sugar
3 tablespoons honey
1/4 cup yellow mustard
Preheat the oven to 325 degrees. Place the ham on a rack in a roasting pan. Bake uncovered for 17 minutes per pound for a whole ham, or 22 minutes per pound for a half ham. Use a thermometer to check the temperature-it should read 140 degrees. ABOUT 30 MINUTES BEFORE THE HAM IS FINISHED, combine mustard, brown sugar, and honey in medium bowl; season lightly with salt and pepper. Increase the oven temperature to 375 degrees. Remove ham from the oven and slash the fatty part of the ham in a diamond pattern, if desired. Slather the ham with the glaze. Return the ham to the oven for the remaining 30 minutes. Let the ham rest for 20 minutes before slicing. Ladle any syruppy juices from the pan over the sliced ham.
***** For a ham that requires cooking before eating, follo w the directions above, but cook the ham for 18-20 minutes per pound for a whole ham, and 20 minutes per pound for a half ham. For a shank or butt portion, cook for 35 minutes per pound. Cook the ham to an internal temperature of 160 degrees. 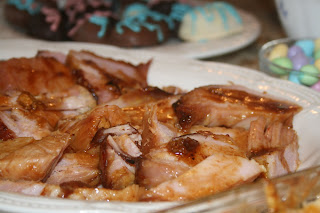 Next Up:
Lemon Tea Cake
Posted by Prudy at 6:55 AM

That is one great looking ham.

That looks soooo delicious. I can't wait to try it this weekend.

Yay! I like the part about "let it rest for 20 minutes" That's about how late my holiday dinners run anyway :)

That looks most Heavenly to me! :D

I have a similar recipe that replaces the mustard option with all things BUTTER -- so the mix is melted, creamy butter, honey and brown sugar.

This can also be used with hams that come pre-cooked and PRE-SLICED (into that spiral shape). But -- I've discovered that you do want to cut the heating and cooking time for hams that a pre-spiral sliced -- as those nice spirals tend to warp in different directions if it spends too much time in the oven (that means a dry ham).

Your ham looks yummy, but the thing that caught my eye, were the peanut butter chocolate eggs. I can't wait to make those. They were so delicious last year. I'm glad you have the recipe on here ready and waiting for me.

I am curious though - what do you mean by good brown sugar. We only have one brand here and we can buy it in golden yellow and regular dark brown sugar.

Alexis:
I love C and H. Some of the grocery store brands are just not that yummy. If you've got a brand you love, then you're all set. And truthfully, it'd probably be good even with sub par stuff. Best of luck!!!

Thank you so much for this recipe. I was just thinking that I needed a good glaze for our ham this year. I've used the packets of glaze that come with it in the past but wanted to make my own this year. Thanks for a timely post. Can't wait to try it!!!

You wrote, "There's a conspiracy out there to make you believe that making a ham is too difficult or time consuming. "

I think there has been a conspiracy out there to make us believe that cooking is too difficult or time consuming.

Carly Jane:
Don't buy a roasting pan! Your pyrex pan will be just fine. I've made one in a pyrex before with perfect results, so I know for sure yours will come out great. Best of luck! Happy Easter.

For a more ed hardy subtle and elegant ed hardy shoes look, consider a form ed hardy clothing fitting easy to slip in ed hardy clothes and out of floor ed hardy store length dress or skirt. They ed hardy Bikini are available in bright patterns, many ed hardy swimsuits chic designs, and ed hardy Caps an array of colors buy ed hardy or one solid and dignified color. They ed hardy swimwear are comfortable and flow freely allowing ed hardy sale for more room to move and even ed hardy glasses dance.If you are looking for a comfortable cheap ed hardy and fashionable maternity blouse, there Christian audigier are blouses of every variety that are both stylish and comfy.

Looks so delicious and thick on the ham! Will definitely try this next time I make my ham recipe: http://www.cookeatdelicious.com/sauce-recipes/ham-sweet-glaze-recipe.html
Thanks!

I never leave comments...but I just had to go through my history...find your page again...and comment on how delicious this easy recipe was!! I've tried other home made glazes...but this one was absolutely THE BEST I've ever had! Not only was the taste superb...but it made the ham SO tender and juicy!!!

Thanks SO much for this wonderful recipe...my husband said this was the best ham I've ever made!!!

This was DELICIOUS. I prepared a ham last night following the recipe and my husband cursed like a sailor from start to finish, he loved it so much. Haha! So easy and just so, so heavenly. I used a Pyrex pan and it was easy-peasy. Thank you!!

There is definately a lot to learn about this topic. I like
all the points you've made.
Here is my homepage : agen bola betting

Absolutely delicious!!! I have tried many different glazes and this one was hands down the easiest, yummiest glaze out there. ***I did, however, add cloves to the ham prior to adding the glaze. I baked the ham with the cloves up until the 30 min mark, then I removed the cloves and added the glaze as directed in this recipe. It was almost perfection! Thank you for sharing!

Great post. I was checking continuously this weblog and I'm impressed! Very useful information specially the final part :) I deal with such info much. I was seeking this certain info for a long time. Thanks and best of luck.

I really like what you guys are up too. This type of clever work and reporting!
Keep up the great works guys I've added you guys to our blogroll.

Hi to all, because I am truly eager of reading this website's post to be updated on a regular basis. It includes nice information.

What's Going down i'm new to this, I stumbled upon this I've discovered It absolutely useful and it has aided me out loads. I am hoping to contribute & aid different customers like its aided me. Great job.

I have read a few excellent stuff here. Definitely price bookmarking for revisiting.

I surprise how much effort you put to make this type
of wonderful informative site.

Hi there, this weekend is fastidious for me, for the reason that this moment i
am reading this impressive informative piece of writing
here at my residence.

I just like the valuable information you
supply to your articles. I'll bookmark your weblog and take a look at once more right here frequently. I'm fairly certain I'll learn lots of new stuff proper right here! Good luck for the following!

It's in point of fact a great and useful piece of info. I'm satisfied
that you simply shared this helpful info with
us. Please stay us up to date like this.

Thank you for sharing.

Nice blog here! Additionally your web site quite a bit up very fast!
What web host are you the usage of? Can I get your associate link for
your host? I desire my web site loaded up as fast as yours
lol

There's definately a lot to know about this subject. I really like all of the points you made.

I'm excited to find this website. I want to to thank you for ones time for this particularly fantastic read!! I definitely appreciated every bit of it and I have you bookmarked to check out new things on your site.

The Best glaze i have ever tasted!!!! And so simple to make.

It looks really great I'm about to put my ham on first yr cooking thanksgiving!!!

almost could reads your blog but your choice of a busy background with light print makes it almost impossible. will not waste my time here again trying to read what can't be seen clearly.

I would like to try this recipe but if the ham is labeled fully cooked, why Bake it for just as long as The uncooked ham?? Just wondering if i missed a step as my 10lb half ham will take 3.5-4hrs per the recipe instructions. Thanks

this honey, mustard and brown sugar on my ham was simply the best! It was so delicious my grand kids loved it! Thank you so much!!!