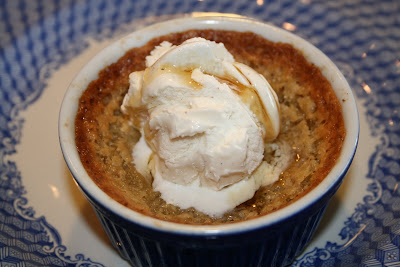 My computer is having a terrible temper tantrum. She's kicking and screaming and refusing to let me download any photos. I've been coaxing her for hours, but she is stubborn when she's grouchy. Until she calms down a bit, you'll have to use your imagination to picture the most fantastic pear tart imaginable. (Imagine indescribly delicious looking photo here...)
Today's pick for Tuesdays with Dorie is special, not just for the recipe, but also because it was picked by baking maven Greenspan herself! I think I know why she chose it, too. If you didn't try it for yourself, it might not be one to jump out at you. There are no unusual ingredients, except possibly for the option of using canned pears. Canned pears! Canned pears? Yep, only I didn't use them. I happened to have a lovely ripe pear on hand (imagine photo of curvy golden pear), but you can bet your sweet syrup that I'll be trying this one again with CANNED pears soon. But I'm getting ahead of myself. Ideally, these pears canned or fresh, will be placed in an almond and butter crust (which I left out in a time crunch), and then baked in an irresistible luscious almond cream. Not knowing the greatness that lay ahead, I made only a wee crustless 1/2 batch in two ramekins and topped them warm with vanilla ice cream and a drizzle of warm maple syrup. It won't be long before I make the whole thing again, with canned pears and a crust, too.
To get your hands on that recipe, visit Dorie Greenspan's baking blog here.
For my penny pinching friends, betcha can make this impressive tart for about $7.00
Coming Soon:
Photos, I hope
Banana Sour Cream Pancakes
Posted by Prudy at 6:49 AM

Can't wait to see the photos - it is an amazing recipe!!

Wise of you to test drive the recipe, Prudy. Now you know to go full steam ahead! My second one was 10" and it was great for a dinner party. Hope your computer cheers up soon and feels like being a team player.
Nancy

My computer did the same thing yesterday! It was so annoying! I hope yours gets fixed soon! I can picture your gorgeous tart though!

I can visualize the exquisiteness! Your fresh pear/crustless version sounds amazing. Actually, that almond cream alone, straight from a bowl with a spoon, sounds amazing. I hope you get your computer issues worked out -- I feel my blood pressure rising just reading about yours (computer problems do that to me).

Ahh, hang in there!!

I imagine that this is the prettiest tart I have ever seen.

I had the same problem loading photos last week! I hope you get that corrected. I'll be back to see your tart. It was so delicious, wasn't it?

It sounds super yummy and might be better that I don't have pictures to drool over! I bet it looks amazing as all of your dishes do.

Prudy -
Those darn computers! I imagine that your tart looks scrumptious! I checked out Dorie's site - there are a lot of bakers in the Dorie circle. How cool!

Thanks so much for all of the wonderful recipes and ideas. I am so glad I found your blog. I can't tell you how much I admire and appreciate everything that you do.

I can't wait to see the mouth-watering pictures! Just reading your discription has me drooling!

I cannot wait to see pics! It sure sounds great!

Can't wait to see your photos!

Sorry about the computer. I hate things like that!
I can imagine the beauty and the tart-crustless. and the taste!
Your tamales were amazing. Thanks for including the step by step pics- they were very helpful!

I hate it when inanimate objects think they can run your life! And now we have no reason to drool on our monitors, perhaps saving us from bouts of computer crankiness.

I hear you - my husband told me I could make this again. Tomorrow. :)

Cooking for Comfort by Jennifer said...

Sorry your computer is having a hissy fit....I hate it when that happens!

This tart was wonderful and I've no doubt it looked fantastic!

Dont feel bad I deleted my photos on accident :(I hope you can get yours uploaded.
This recipe is a keeper for sure!

I loved this recipe! I was especially impressed by the crust- so you really should try it out soon- so easy and so delicious!! That being said, I love the idea of doing just the almond cream with the pears and serving it with ice cream! The almond cream tastes so fancy and it was so easy to make! Sorry about your computer- I hope it gets well soon!

Can't wait to see the pictures.

I hope the computer calms down.

Well your puddings sound divine!
Hope you are up and running soon.

Can't wait to see your pictures!! It sounds absolutely delicious.

I hate when my computer gets all fussy and impatient. At least the tart didn't give you troubles.

It's OK - we know how pretty your tart was and how good it tasted! Happy New Year, Prudy!

I'm sorry your computer wasn't cooperating, but she looks like she's over her tantrum now (too much Christmas?) the pear tart looks delicious. And if the idea of using canned pears didn't come from either you or Dorie, I would never even consider it! I love how cute it looks in the little ramekin.

Yes, that looks very fine...and I have to say, the canned pears were mighty good...yep, they were. We can count that photo, can't we...anything that makes us want to eat something this tasty should count. BTW, happy new year...are you back in school yet or do you have a few more days? I miss those days!!!!!

Hi Prudy! How are you? Hope your holidays were wonderful...I'm certain they were delicious! This pear tart sounds yummy...I love to find recipes that can use canned fruit...then I can make them in the winter when fresh fruit isn't so easy (or cheap) to come by. Thanks! =)

Computer problems are the worst! But is that a crustless tart I spy at the top of this entry? Looks fab! And I think baking it in ramekins w/o a crust is a great idea--gives the illusion of a slightly healthier dessert. (ha!)

Even without photos, it sounds super tasty. Banana pancakes? Oh Prudy. I'm going to invade your house and blockade myself in your kitchen. And never leave. I'll get so fat I'll pop through the windows and doors!

I'm sorry to hear about your computer woes. It usually helps if you ignore her for a bit - let her know who's boss, you know. If that fails, a good thump usually works. Good luck :)

LOL. The story of cheese and fatty is probably the story of Bill-- a delievry man who finds a strange package for Santa! :) You'll like it.

Looking forward to the pictures!

Oh, I'm glad you got your computer back up and running! Everyone seems to be raving about these tarts!
~Cat

Ohh Erin, I feel your pain. I got a new camera at the end of November and it has been a real pain in the patootie. I can't begin to describe what it's put me through. I sent for a new one today as I am just so fed up with it I hate it and will never ever like it again. It's now Todd's. let him fuss with it . . . Nevertheless the photo you have shown us is quite tasty looking anyways!! But then again, everything you make looks delish. Hope you get your comp problems sorted soonest. XXOO

Ooh, that top photo is mouthwatering! :) Sorry about the computer issues, blech :( But glad you enjoyed the tart!

Oh Erin.. have you recovered from the Holidays yet? You are phenomenal in all that you do!!! I hope you get the comp to listen.. sadly it may not hear you.. I am happy you are back though.. I sure missed you.

I hope your computer is behaving itself soon! Sounds like a certain 2-year-old that lives around here. =) I can't wait to see the pictures!

I bet your tart was AH-MAZING with vanilla ice cream and maple syrup! HOLY YUM! Bummer about your blog's temper tantrum. Just let it throw its tantrum until it falls asleep. Thats what my hubs does when I throw a tantrum. After a few hours I just curl up and take a nap and then I am all good. HAHA.
Clara @ iheartfood4thought

The only downside to the canned pears were their rather small size. Other than that though, they were convenient. One less step is fine with me!

The only down side to using canned pears were their rather small size. Other than that though, they were convenient. One less step is fine with me!

hope that computer has calmed down! :) i like your crustless tarts--you got all the best parts!