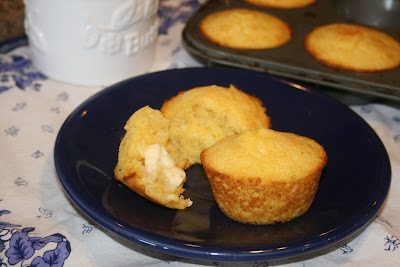 Want to hear a corny jokc?
A man walked into the Dr.'s office. In his ear he had a carrot, in his nose an ear of corn, and in his eye a wedge of cucumber. He complained to the Dr. that he wasn't feeling his best. "Well," the Dr. replied, "The trouble is you're not eating properly....."
Nyuk, nyuk, nyuk.
If you're going to make a recipe named "CORNIEST" corn muffin, then you'd better have some corny jokes to go with it.
Like this one: What did the kernel say to the other kernel? My pop's bigger than your pop.
Ooh, boy-that's pretty corny.
Or if you prefer that no one roll their eyes, serve up your corniest corn muffin with a less obnoxious partner, like William Sonoma's Crock Pot chili. Both recipes are part of my Fall Kick Off Menu, which also includes:
Pear and Walnut Salad with Honey Dressing (coming tomorrow)
Spicy Pumpkin Vegetarian Chili
Caramel Apple Wedges (coming soon)
Brown Sugar and Oatmeal Crumbly Apple Bars
Corn bread is particularly delightful baked in a muffin tin, since it provides lots of crispy surface area. Besides having fresh corn kernels in the batter, these are extra corny with a high ratio of cornmeal to flour. Serve these up with loads of honey butter to bring out that natural sweetness.
Money Saving Tips: Cut any corn off a leftover cob for this recipe. If you don't have buttermilk on hand, just put 1 tablespoon lemon juice or vinegar in a 1 cup measure. Pour in milk to the top and let stand for five minutes. If you're out of cornmeal, you can grind popcorn kernels in a wheat grinder or powerful blender to make your own. 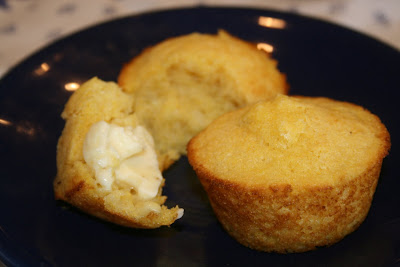 Dorie Greenspan's Corniest Corn Muffins
Estimated Cost: $2.00 for 12
Notes: For picky eaters, you might want to make some without corn kernels. Just pour some batter into the tins before you add the corn, and add a bit less corn to the batter to compensate.
1 cup flour (I used half whole wheat)
1 cup cornmeal
6 tablespoons sugar
2 and 1/2 teaspoons baking powder
1/4 teaspoon baking soda
1/2 teaspoon salt
1 cup buttermilk
3 tablespoons melted butter, cooled
3 tablespoons corn or vegetable oil
1 large egg plus 1 egg yolk
1 cup corn kernels, fresh or frozen or even canned
Preheat oven to 400. Thanks for the the reminder, Cat!:) Grease a 12 cup capacity muffin tin. In a large bowl whisk together the flour, cornmeal, sugar, baking powder, soda, and salt. In a separate bowl, whisk together buttermilk, butter, oil, egg and yolk. Gently stir wet ingredients into dry just to blend. Stir in the corn kernels. Bake for 15 to 18 minutes.
William Sonoma's Slow Cooker Chili 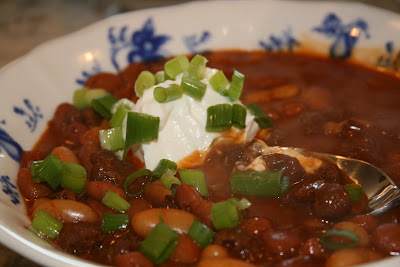 The convenience of slow cooker chili is chief among its virtues. In fact, I first made this recipe about five years ago on The Quiet Man's birthday which also happened to be the day that we were running a marathon. How do you host a party (or do anything that requires movement at all) after a 26.2 mile run? I made the chili the night before and stuck the whole crock pot in the fridge, plugged it in the morning, left for the run and came back to scrumptious birthday dinner.

Money Saving Tips: Buy your ground beef in bulk during chili season. (Albertson's and other supermarkets frequently have it on sale for about $2 per lb.) Divide it into 1 lb. portions and freeze it for easy dinners. Cook your own beans from dried for an even cheaper meal. 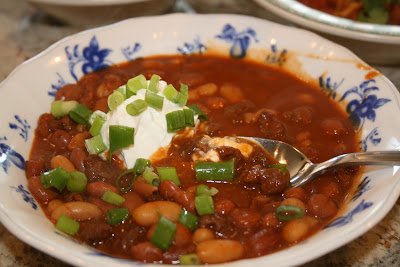 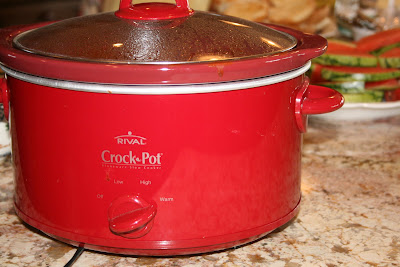 Coming Tomorrow: Pear and Walnut Arugula Salad with Honey Dressing
Posted by Prudy at 5:40 AM

HAHA!!! Love the jokes :0) And love the comforting recipes, of course (and as always)!!

Love the red crock pot! Your Chili and cornbread sound easy enough that I can handle it. I'm all about easy. We aren't there on the chili weather yet but maybe soon.

That chili looks good enough to eat, even if I am a vegetarian. It looks delicious. And I can't wait to try the corniest corn muffins with your corny jokes! We made your pumpkin chili in our crockpot yesterday. It was a big hit!

It seems like now that the weather is cooling off, everyone is making chili. I love reading through the many different types of chili recipe that are out there. My Dad made the world's best chili but my husband and kids won't eat it because it has beans in it. Your chili looks great! They don't know what they're missing eating plain chili. The muffins look great, too.

I hope you don't mind if I copy your joke to add to my son's lunchbox tomorrow morning. I'm always adding corny jokes for him and his friends to read at lunchtime.

You're so cute with your corny jokes :)

I've made those corny muffins before and we enjoyed them. It's definitely getting to be chili weather for sure. I love a good slow cooker recipe too!

Hi Prudy! How weird that you and I would have such similar meals in the same timeframe. I made a similar corn muffin recipe (posted on my blog) along with my own recipe chili. The corn muffin recipe I got from Taste of Home, but it just wasn't sweet enough for me, I'm still waiting to find something to top Jiffy! LOL I compared yours to mine and your has more sugar, I think I will add yours to my menu next time I have them. :)

With all the rain we've had this weekend, having chili and corn muffins sounds so appealing! Looks like great recipes!

What a beautiful fall meal. This looks like comfort food at its best.

I'm sending the eating properly joke to my nephews...I wish they were close enough to come over for the muffins, too. That's a great recipe; I've been making those too.

Of corse you had to serve the corniest corn muffins with some corny jokes! Ahahahah! You're too much! No hot jokes for the chili? ;)

I really must get a slow cooker! This looks fab. At least I can make the corn muffins straight away (would you believe Ive never made them)!

My kids are going to LOVE that corny joke!! This has been one of those weeks that had me thinking "I really need to get out that Crock Pot." The chili looks perfect and the corn muffins will be a great treat! I adore your red Crock Pot!

i love a crock pot recipe that doesn't involved condensed soup!:) this one looks like a winner. i can't wait for the temperature to dip below 90 here so i can try this out. my family is revolting at my fall menus when it still feels like summer. but it's so hard to wait.

I have actually never made chili in a crock pot...I am missing out aren't I? Everything looks so good...I want one of those corn muffins now!

Not only am I impressed that you ran a marathon, but that you actually put together a birthday dinner (crock pot or not!) afterwards!

This just cracks me up!! Corniest corn :D I will have to remember that. I can't even begin to tell you how much I love chili and cornbread/corn muffin. Especially at this kind of weather, rainy and gloomy.

Nothing says fall like a warm bowl of chili, corn Muffins- there is so much you can do with Chili and you sure know how to master a recipe.

I wonder if I can add pumpkin... you are truly an inspiration!

Chili and corn muffins together are one of my very favorite...yours looks delicious!!!

chili and cornbread is my favorite meal in the winter and it's fast approaching around here, so I can't wait to try your chili recipe!

Loved the jokes! Too funny! I am so excited for the fall (although mine lasts a whole week or so here in TX, oh well) I love chili and Corn Bread...it is a favorite! Can't wait to try these recipes!

Yummy!!!
The cornbread muffins and chilli is a great meal to kick of Fall.
Time to dig out my crock pot....

Nice looking chili! I'm about ready to break out the stock pot myself.

Chili would be a great way to recover from a marathon, or half! I love your jokes! The cornbread looks great!

I love the slow cooker. I just made it a permanent resident on a counter for fall/winter. They are heroes in the kitchen.
I agree about the corn muffins, the more surface crunch, the better.
Yummy fall meal. All you need is a beer.

I made some corn muffins the other day to go with some soup and I was not impressed with them. While they had a good flavour, they were far too crumbly. I love corn muffins, and will have to give your recipe a try! That chili looks fab as well!

well, i love corny jokes (and terrible puns and witty one-liners), cornbread, and chili, so i enjoyed this post immensely. great recipes (and don't be surprised if i break out those jokes myself...)! :)

I love that the chili is made in the crock pot!! And I never knew you could use popcorn like that - so interesting!!

I'm making my mom's chili this week and now I have to make these muffins to go with it. I would never had thought to add wheat flour to it though... thanks Prudy. Good jokes too. You had me crackin up.
~Cat

I love slow cookers but unfortunately only have a few recipes that I make in them. This looks wonderful, especially with the addition of cornbread.

I'll have to share your joke with my fourth graders. They'll love it!

I love Dorie's corn muffins - one of my favorites in the book. I'll have to remember to make some corny jokes next time I'm baking them.
It's driving me crazy that I am ready to make hearty fall food but it's still in the 70's here on the East Coast - bring on some chill, mother nature, so I can make me some chili!

I've been wanting to nominate you for an award, but you have them all already :P! Ah well, just know I thoroughly enjoy your recipes and check back whenever I can! It's getting so cool over here that I will have to make this chili! It's a must, I've been so busy this recipe will come in handy. Plus, it's a hubby favorite :). Hope you're doing well!

Hi Prudy, a year+ after you posted this, we finally made it!! It was absolutely delish. Had to comment to let you know! :) Hope NYC was a blast (and a success!). Look forward to hearing all about it.