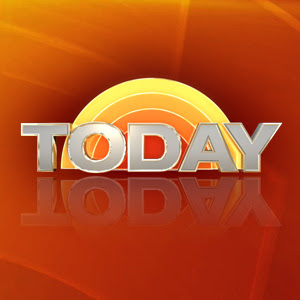 We have a winsome, yet reluctant celebrity in the family. And it certainly isn't going to his head.
West was on the Today Show this morning making his More Rockin' Moroccan Peanutty Pita sandwich with the four other adorable little girl finalists. I don't know if he realizes how lucky he is. Does any child? West looked so small and timid on TV. It made me want to poke him in the ribs and make him smile. But I wasn't anywhere near him; I was in the lobby, hobnobbing with Curtis Stone. Curtis Stone! Not really hobnobbing, but begging for photos and smiling adoringly. He's about as kind as they come, but we'll talk about that later.

Anyway, I was glad that West was on with Hoda and Ralph Machhio. In case you are wondering, Ralph looks approximately two years older than Westy. I wanted to wrap the two of them up in a soft blue banket, my West and the Karate Kid, pinch their cheeks and feed them a jar of vanilla custard baby food. Two wee babes in arms and neither one of them hogs for attention. Hoda was sweet too, and the last thing she says on the video made me burst out laughing. Something like "Look at West-he just wants to get out of here!" I think she was right, because he perked right up, and recovered his strength by gulping down an entire frozen mint hot chocolate at Serendipity.
All I can say is that we are having the very best of times. I honestly don't care about the outcome of the cook-off. We feel like winners just for the experience and the finalist prize of $2500. But hurry over and watch my boy on the Today show, before they whisk away the link. And once again, thank you, dear readers for voting for my little peanut butter celebrity.
P.S. Sailor is happy too, since she made it on the show as one of the jumpy fans peeking through the Today Show windows. Phew. That was easy.
P.S.S. For my New Yorkers, West will be on channel 11 in NYC tomorrow morning around 7ish.
Posted by Prudy at 6:55 PM

Everyone at my house was screaming with excitement to see Mr. West on TV. It was so great.
He did wonderfully! He looked so little and cute and boyish. (He and Ralph Macchio).
We are all really proud of him! It did kind of feel like him being on the Today Show was the grand prize...I almost forgot there is still a cook-off!
Good Luck! We love you all!

Three Lads and a Lis said...

what a classy kid, how fun for him to have such a neat experience. His recipe sounds delicious, we plan on making it sometime soon.

What a cutie!!! Both West and Ralph! :) I'm so glad you are all having a wonderful time. Congrats to West!!! - mary

I know how proud you are of him mom...and you have every right to be...have lots of fun! Come say hi :D

How cute! Thanks so much for posting the link. My mom called me at 8AM to tell me he would be on and to make sure and watch, but hello...it was 10AM for me out here in the midwest and I was so bummed out. He is just the cutest thing, and looked half the age of the other kids. How impressive that he did this! Also, since I am already rambling, does anyone ever say that he looks like Papa (grandpa)? I see it in his eyes and facial expressions. Makes my heart jump around all happy like. Here's hoping for the big win but hanging out in NY drinking frozen hot chocolate and starring on morning television...it sounds like he could already do a victory lap. AWESOME experience!

Oh, how I wish I could have seen him. I am sure he did wonderfully. I have the priveledge of meeting Curtis Stone several years ago and having my picture taken with him. He was so handsome and so very nice! xxoo

Oh Prudy, he is just so sweet.

You must be glowing with pride:-}

It was so exciting to see Little West on TV! My kids were thrilled. Adam Michael was so glad to see how well his pal did and Annaliese was so excited because she was the one who spotted Sailor in her adorable red coat in the background. It sounds like you are having a wonderful time in NYC. We hope Westy wins! His recipe really and truly looked the most delicious! Good luck!

If the winner was chosen for adorable-ness West would win hands down!!! Congratulations!

Awww, congrats to your little guy!

We loved watching that clip! So proud of West in his TV debut. No surprise that he's doing so well in cooking competitions!
So glad that Sailor got to be on TV, too. How perfect.

We loved watching West. We were all so excited to see him, and I was so glad Jordan was home to see him with me. We couldn't stop smiling and were so happy for him. He did so well, and he looked so cute.
I thought he looked like little Jack when Jack was little.
I also thought it was funny he was on with Ralph Macchio, The Karate Kid, because Jack always reminded me of him when he was a teenager.
I was wondering if anyone else happened to think that.
Well, it was so fun to see Shane and Sailor in her little red coat waving.I recognized her immediately at the window and knew she was excited for her brother. We were too, in our living room!
We loved the whole show, and felt very proud of West and your whole family. I can wait to see what's in store for you next.

That was can't, can't wait to see what's in store for you next.
I really can't.

I talked to Leslie yesterday and she told me that Sailor and the Quiet Man were waving in the background, so I went back and watched it again. She looked so cute and so happy for her brother. How exciting for all of you (and us too actually. =D )

What a fun time :) And yeah, that last comment she made about West was pretty hilarious. His recipe sounds soooo good. They all did actually...I hope he wins.

We were just in NYC and enjoyed ourselves that same treat at Serendipity earlier this week! Congrats, and good luck - such fun times!

I just loved watching West, he was so cute! What a wonderful experience he will remember forever, bless him. Funnily enough, I was watching the Karate Kid on tv the other and I wondered what Ralph Macchio was doing these days. He looks like he hasn't aged at all! So glad you are having a great time and best of luck with the competition! :-D

He is so adorable. Congrats to him and to you!

Sheesh! I saw that and didn't make the connection. Good job, West and the sandwich sounds delicious!

Well your article helped me truly much in my college assignment. Hats afar to you dispatch, will look audacious in the direction of more related articles without delay as its anecdote of my pet topic to read.

I have been looking to figure out a place to begin the acai free trial & was wondering if anybody had any thoughts on whether or not it works for weight loss? So far here's the 1 [url=http://acaiberries.zoomblog.com/]article[/url] I've been able to check out that seemed real for the goals I have. Opinions?

How fantastic for him and all of you!!!!

He looks tiny compared to all those girls. Bless his heart!

AWESOME!!! What a fun experience!

Sorry for my bad english. Thank you so much for your good post. Your post helped me in my college assignment, If you can provide me more details please email me.

For a more ed hardy subtle and elegant ed hardy shoes look, consider a form ed hardy clothing fitting easy to slip in ed hardy clothes and out of floor ed hardy store length dress or skirt. They ed hardy Bikini are available in bright patterns, many ed hardy swimsuits chic designs, and ed hardy Caps an array of colors buy ed hardy or one solid and dignified color. They ed hardy swimwear are comfortable and flow freely allowing ed hardy sale for more room to move and even ed hardy glasses dance.If you are looking for a comfortable cheap ed hardy and fashionable maternity blouse, there Christian audigier are blouses of every variety that are both stylish and comfy.

That is aswell why LV accoutrements adore top report. One more, because for louis vuitton bags, anniversary of them is fabricated by hand, accordingly it banned the assembly speed. Their aegis action aswell embodies the ability of louis vuitton handbags Discount bags. There has anytime been a analysis about who are those people, who are acutely absorbed with Louis Vuitton Dentelle handbags.